What a week - rain, rain and more rain, grey skies and today cold winds so it was not surprising that early Tuesday morning was the first opportunity to visit Simon’s grave. The sheep had been selectively nibbling the flowers but otherwise all was neat and tidy and it was good to greet the farmer, as he arrived to feed his sheep and deal with the new lambs that had been born overnight in neighbouring fields. His farm, None-go-bye, was studied by my geography GCSE group more than ten years ago so I know it well. He had dairy cattle then but like many Dales farmers he sold his dairy herd because it was no longer commercially viable to keep it. 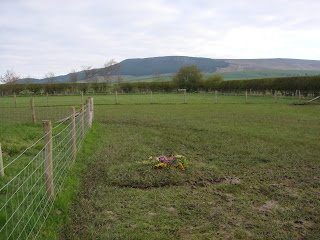 I continue to receive cards, letters, emails and flowers. Two emails came from ladies I have never met but who have been following the blog. These were particularly poignant as Brenda and Sonja are on the MSA journey too. I wish I could visit them and give them a big Yorkshire hug.

It has been really good to get back to work this week, especially as it involved delivering training for a group of fantastic teachers from schools who all have Global School Partnerships with schools in the Mongu district of Zambia. Having three of the head teachers from the link schools in Zambia also doing the training in Selby made it very special and for the whole day I didn’t think about the events of the past month but I missed chatting to Simon when I got home.
One of Simon’s most faithful and responsive blog followers is Joanna, a friend from the early years of our marriage when we lived in New Lanark, Scotland. She has sent me her thoughts and I think they make a fitting finale to this week’s blog.

I have heard people saying that someone they knew had shown them the way to die and I have always been unconvinced until now.

Simon made me look at several things differently as I was growing up:


And now this.
I am glad Simon didn’t take his illness without anger. I respect his outrage!
I am glad Simon kept his sense of humour. I loved reading about the medical profession getting teased and put in their place.
I am so glad we met up in February and had the pleasure of walking around the ceramics exhibition and seeing that sparkle was still there in his eyes.
I am so glad I was able to speak to him about my family and, despite his difficulties with his speech, get reassurance from what he said.
So about the way to die…..
He made us all pay attention and be outraged with him - Quite right.
He made us all think about our relationships with him and how to show how much we valued them – Thank you.
He kept us feeling fully informed of what would come next and then slipped away quietly, leaving us feeling astonished – Well done Simon.

Last week was not an easy one for any of us but friends were a great support. Mark’s friend Tom took him walking in the Dales. They climbed Buckden Pike in hail, heavy rain and sunshine, something that Simon would have done in similar circumstances. Eve and Grace had encouraging ‘phone calls and text messages - two of Grace’s close friends changed their plans to be in Skipton with her.
Last Sunday we all went walking along the Strid at Bolton Abbey and had lunch outside at the Cavendish Pavilion. It was a great environment in which to make some of the decisions that had to be made and on the way back the children gathered pine cones so that we would have a large basket full for throwing in the grave. Squashy and with a distinctive earthy smell and textured surface the pine cones were just perfect. 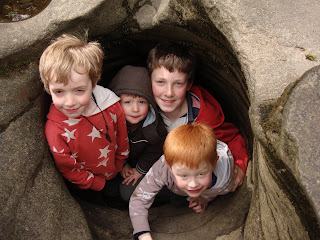 In a pothole by the Strid

Physical activity definitely helped when we felt overwhelmed. Grace and I spent time in the garden, planting some new plants, mowing the lawn and venting our feelings on the weeds. Out there we could ignore the ‘phone which had been ringing incessantly.
Eve was bombarded by questions which continue. Her son Adam likes facts so wanted to know how deep was the hole going to be, who would dig it, could he get into it, why was the coffin screwed into the hearse, when would we be planting the tree.... In Mark’s family Seth was concerned because a woollen coffin surely wouldn’t be strong enough to hold a body.
On the day of Simon’s funeral I woke up just before 5am and felt very restless. As I drank my cup of tea I knew that the best thing for me to do would be to go down to church and sit with Simon – his coffin had arrived in church the previous evening. I listened to the dawn chorus, stroked the woollen coffin, cried a lot and watched the church get gradually lighter. It was a very special time and I left feeling calm and ready to face the day.
We met friends and family as they arrived for the funeral service and there were some lovely surprises – my friends from Pilling when I was a teenager, my university friends, our friends from when our children were growing up in the village, a friend from Freetown days, Simon’s work colleagues who had travelled miles and reorganised busy diaries to be with us.
The whole day was wonderfully appropriate, deeply sad yet joyful. The beautiful woollen coffin with the simple spray of flowers from Eve’s garden, the African fabrics hanging over the ugly wooden chipboard panels [the inside of the church is a building site at the moment], the great singing, all my children’s contributions and Louise’s address, the pine cones being thrown into the grave, the delicious lunch provided by Rob and Jo, all helped to make the day really meaningful and special.
Many people say that the waiting time before a funeral takes place is the worst but for me it was the day after. I am so pleased that on Friday morning I was able to show Simon’s aunt and cousin around the ceramics exhibition before they had to get their train home and that in the afternoon I was back in church with the ‘Smiley Faces’ group. The young mums and their children are always a pleasure to be with. Yesterday I dozed all afternoon on the sofa so there is obviously a lot of sleep I need to catch up on.
If you would like to read the reflections Eve put together and read at Simon’s funeral please get in touch by sending me an email liz@croodhouse.freeserve.co.uk
Posted by Liz at 09:21 2 comments:

In his last blog Simon spoke about the lovely week we’d had and if he’d been able to do an entry last weekend I’m sure that he would have said something similar. Sadly the blog he wrote on 31 March was his last as Simon died unexpectedly and peacefully in his sleep on Good Friday. He was curled up like a hamster. I can’t explain my feelings at the time but within a few hours I was feeling very positive. My lovely husband and best friend’s spirit was free from a body that was slowly consuming him. He’d not had to resort to using a wheelchair or having people caring for him apart from me and he’d died in the home he loved in his own bed.
It had been hard for him in recent weeks as he felt useless and very vulnerable. He was finding it so difficult to stay positive but on the day before he died we had been across to Harrogate to see our daughter and the two boys and he was happier than he’d been for a while. Eve, the boys and I went to Harrogate theatre and all enjoyed ‘Tiddler and other Tales’ while Simon stayed at home reading a book in the conservatory overlooking the back garden. When we got back he was telling us about all the birds he’d seen as we ate lunch together, and Eve got told off for throwing a piece of unwanted toast into the bin instead of feeding it to the birds.
Our Christian faith and its values have underpinned the thirty seven years Simon and I have spent together and hopefully permeated our personal relationships and working lives. If Simon had to die now what an auspicious day to die - following the Easter story certainly helped last weekend. His funeral will take place at our village church, St. Mary’s Embsay, at 11.30am next Thursday, April 19th, followed by a green burial at a beautiful site not far away from where we live in Eastby. I’ve got him a Yorkshire wool coffin made locally which he would certainly approve of.
Grace, our youngest daughter, came home yesterday. It’s been hard for her being thousands of miles away in New York.
I intend to continue Simon’s blog for the time being as several of our friends and family have said that they would like contribute to it. I also think it may help others to know how family and friends come to terms with the loss of someone close to them.
The following poem was written by Penny, Simon’s cousin in Australia when she was coming to terms with her husband’s death. It will be read during Simon’s funeral.
A journey by train
Facing the way the train is going
Allows you to see the landscape flowing
Past the window and out of sight
Always replaced by the next scene’s sight.
Facing back the way we’ve been
Startles but there’s time to grasp the scene
And watch it fading down the line,
To let it go, the past’s grapevine.
Which seat do you choose as you journey along?
Is your focus ahead, much further on,
Or searching behind for what is past?
Perhaps now is where the best will last. 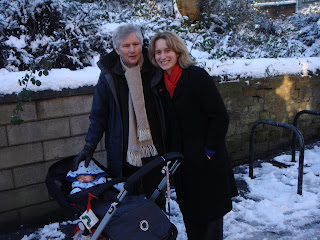